Climate Change and Food Security
​
​​Drought
The dryness and drought trend standard measure is the the Palmer Drought Severity Index. The 'Increasing Drought' map shows the global PDSI  from 1900 to 2002.  For most areas, drier (red and yellow) conditions have progressively increased over the century with a huge jump from 1880 to 1985. ​​The bottom figure shows the trend over time of increasing drought, indicating that for much of the world, droughts are more common.(IPCC 2007​​).
The  PDSI is being questioned to assess drought under climate change because it may overestimate area increase. 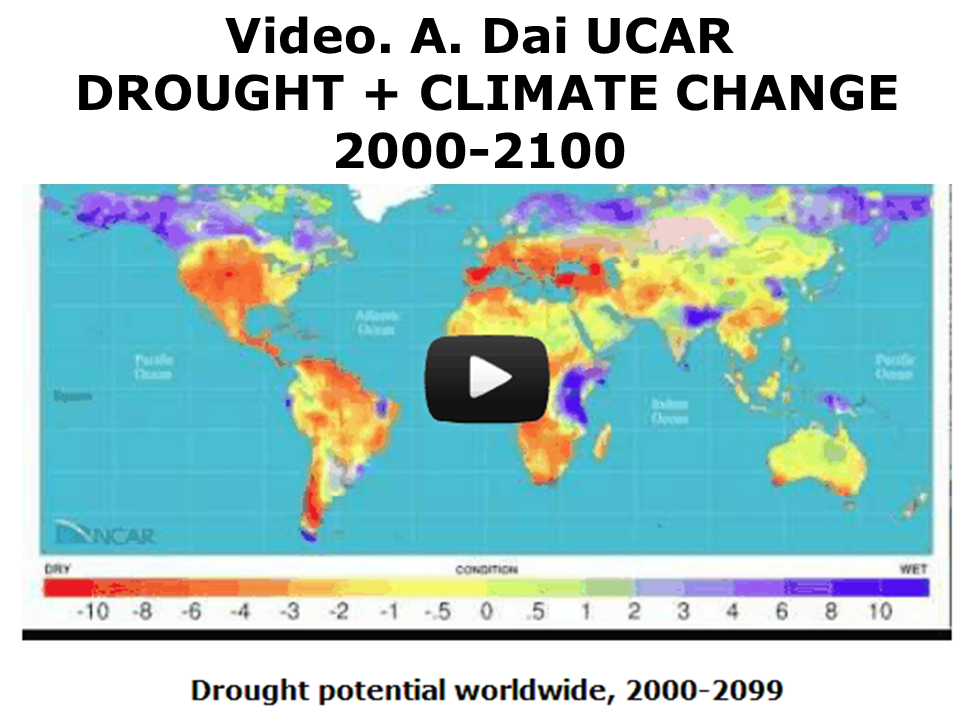 Nov 2013 K Trenberth A Dai ​​Global warming and changes in drought shows a global drying trend 1980-2010, future drought will set in faster and be more intense.

​​A Dai (UCAR) is the top world expert in drought modeling past and projected global drought. Remember we are already locked into a warming today's 2-3X today's 0.8C because of the climate change commitment.

​​Global warming induced drying is projected by models to affect major food producing regions as increased precipitation moves towards the poles . While drought occurs in Summer, Winter rainfall is important because it replenishes water sources.

Drought Is Increasing - more than doubled world wide according to A. Dai 2010.
However since 2012 the science on how much global drought has increased has been questioned.
​
Tne IPCC AR5 says drought has increased in certain regions -Mediterranean and West Africa
and likely decreased in central North America and north-west Australia since 1950 (IPCC AR5 WG1 Ch2. Extreme Events).​

The most recent paper is by A Dai 2012 and revised who upon review finds observations and models show world drought is increasing under global warming.

While we think of drought being a summertime event winter drought also matters. In 2011 NOAA ​​reported that dangerous wintertime drought was increasing around the Mediterranean.
​​
Drought, which is water shortage, can be defined in a number of ways. It will continue to increase ​as global warming continues and global temperatures increase.

Global warming related increased drought affected the temperate  NH late 1990s and early 2020s.
​Over the past few years it looks like ​​Northern hemisphere drought is increasing, affecting all the world's best food producing regions. The rapid loss of Arctic cooling snow and ice albedo cooling is projected to increase N. hemisphere drought, so may now be a factor.
LIVESTOCK
​
​The 2007 IPCC assessment found the impact of drought on livestock to be far more than
​previous assessments.  The impact on animal productivity due to increase variability
​in weather patterns will likely be far greater than effects associated with the average
​change in climatic conditions. Lack of prior conditioning to weather events most results
​in catastrophic losses in confined cattle feedlots (Hahn et al., 2001), with economic
​losses from reduced cattle performance exceeding those associated with cattle death
​losses by several-fold (Mader, 2003).

​A number of studies in Africa (see Table 5.3) and in Mongolia (Batima, 2003) show a strong relationship between drought and animal death. Projected increased temperature, combined with reduced precipitation in some regions (e.g., Southern Africa) would lead to increased loss of domestic herbivores during extreme events in drought-prone areas. With increased heat stress in the future, water requirements for livestock will increase significantly compared with current conditions, so that overgrazing near watering points is likely to expand (Batima et al., 2005).

Drought is damaging of course the human population health by lack of water and increase in diseases. In past droughts -  millions have died. This will greatly increase  the effect of climate change induced food losses to human health and survival shown by the climate crop models . 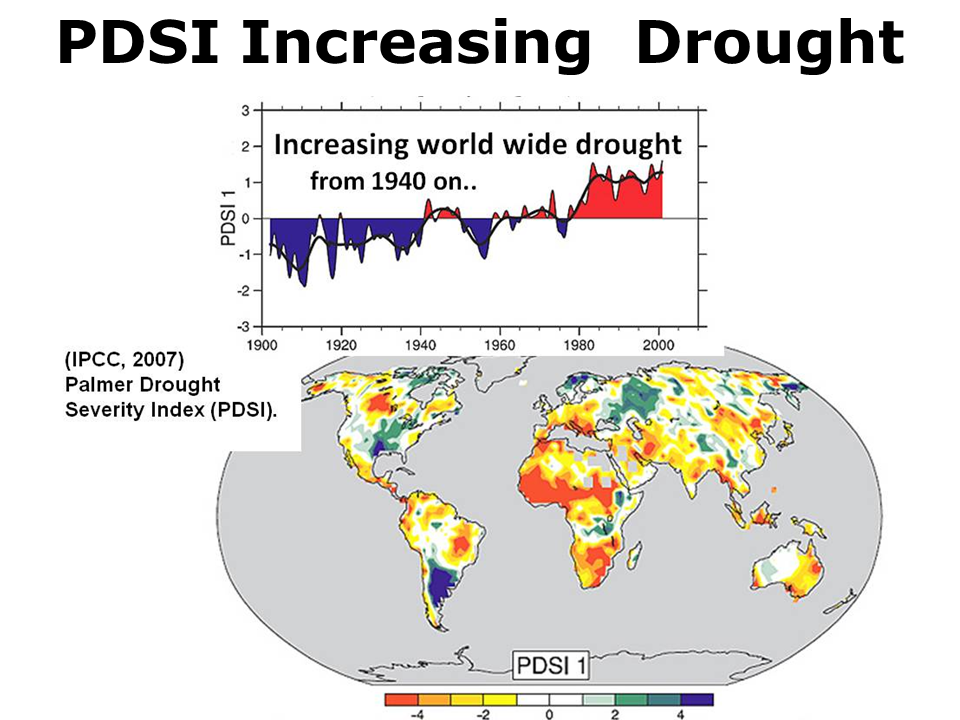 The world's most productive agricultural region is the US Great Plains called the world's breadbasket which stretches up to Canada. This region has a recent history  and a far distant history of natural vulnerability to drought, and suffered a major drought in 2006.  Climate change is projected to increase plains drought (USGS). The NOAA North American Drought Monitor covers this region. For current US drought check US Drought Portal. 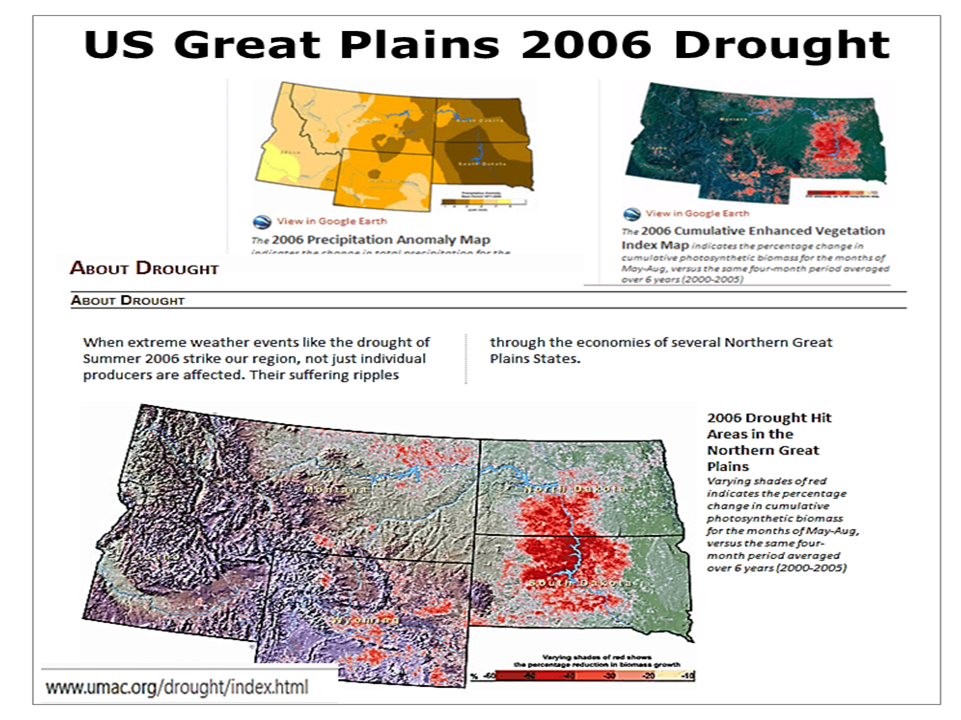 The Future: drought will increase and spread more rapidly
Drought History ​page
Both (model) projections indicate Southern Europe, North Africa, Mexico, the Caribbean, and a large portion of the United States and Canada will likely to suffer dramatic increases in the incidence of drought.
​Floods and Droughts in a Changing Climate – Now and the Future
April 29th, 2011 Paul A. Dirmeyer Center for Ocean-Land-Atmosphere Studies  Maryland.
The loss of Arctic snow and ice affects the N.Hemisphere 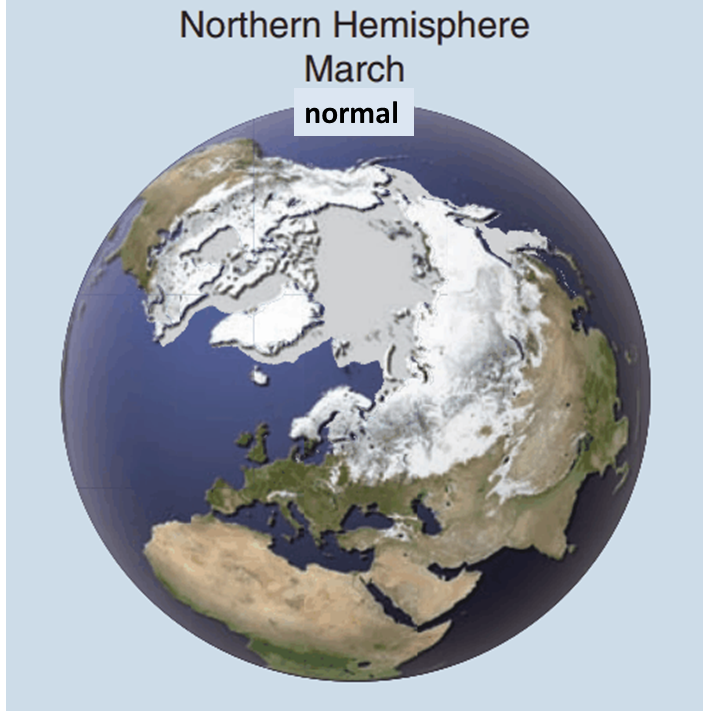 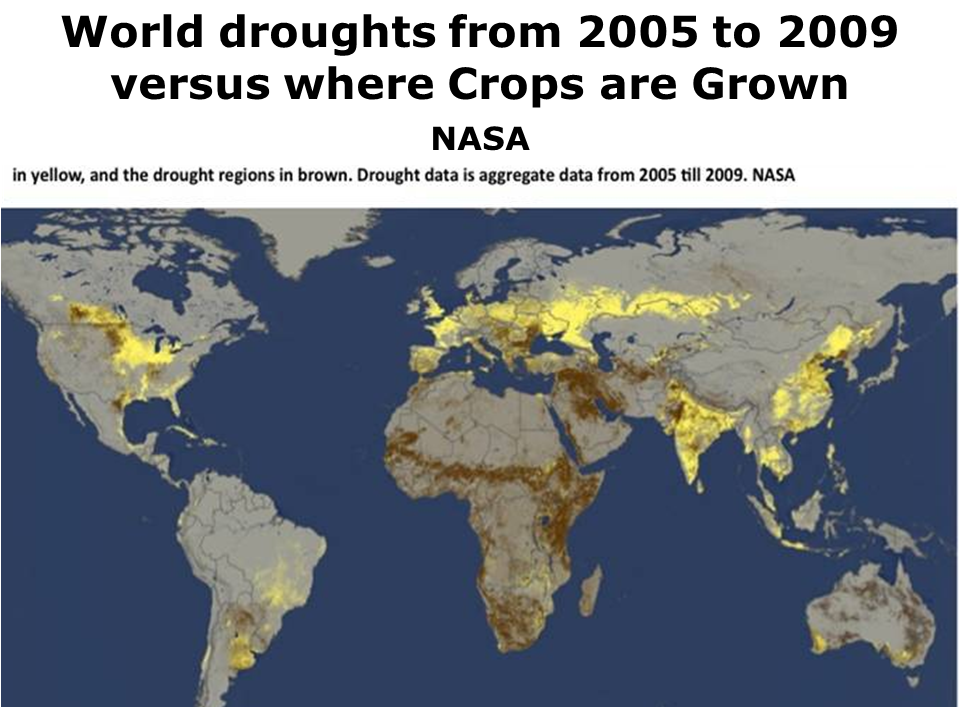 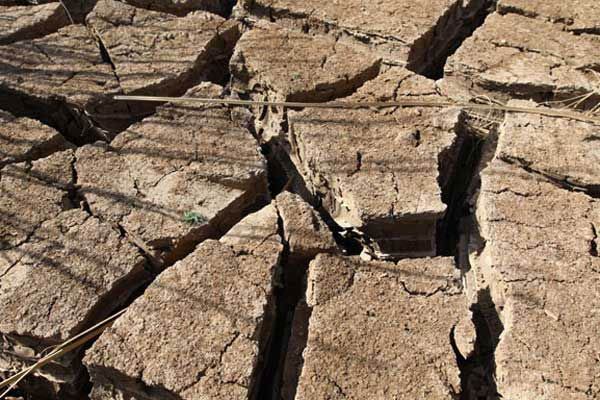 The extent of increasing drought extent over the past 50 years according to the PDSI  is questioned by new research, though the projection of drought increase with global warming is not in question.

There ​​has been several very severe NH extreme heat - and drought events since 2000.
There is a long history of episodic severe and long lasting affecting all the world's best food producing regions. Experts at a 2009 WMO workshop   agreed that global warming will greatly increase this natural tendency, with increasing heat waves  and more drought damage to crops.
​
The loss of Arctic cooling albedo especially the snow will increase NH heat waves, drought and prolong these extremes. 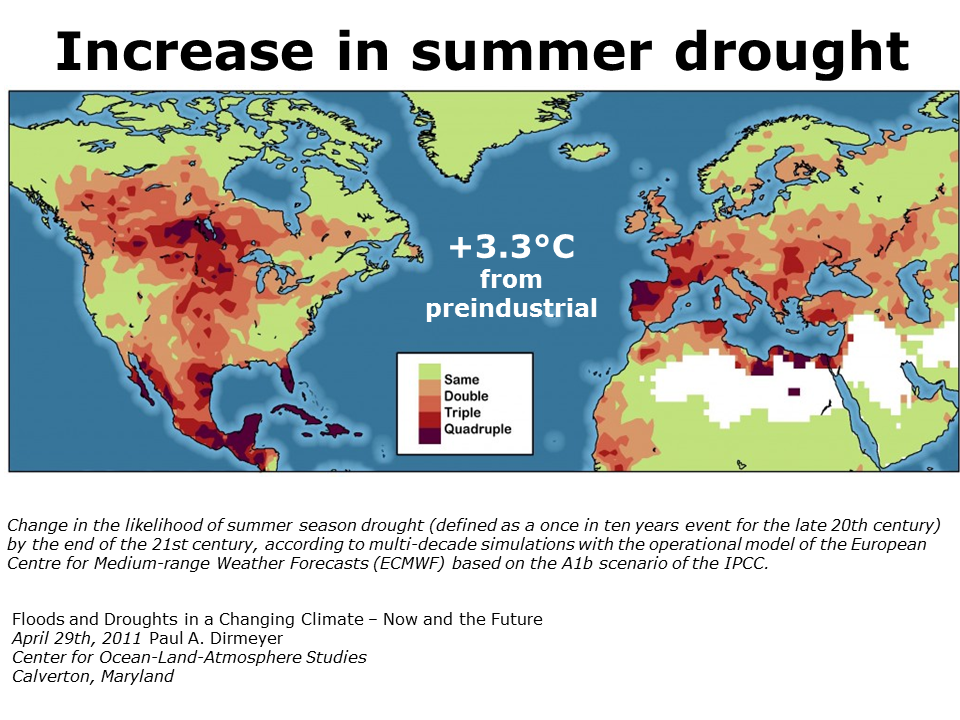 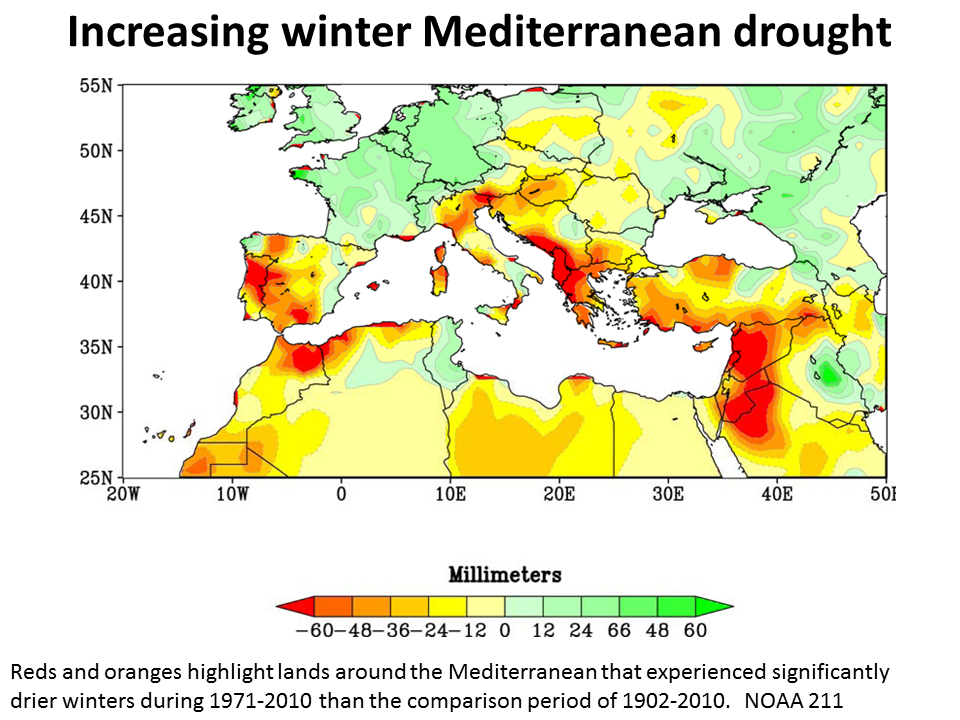 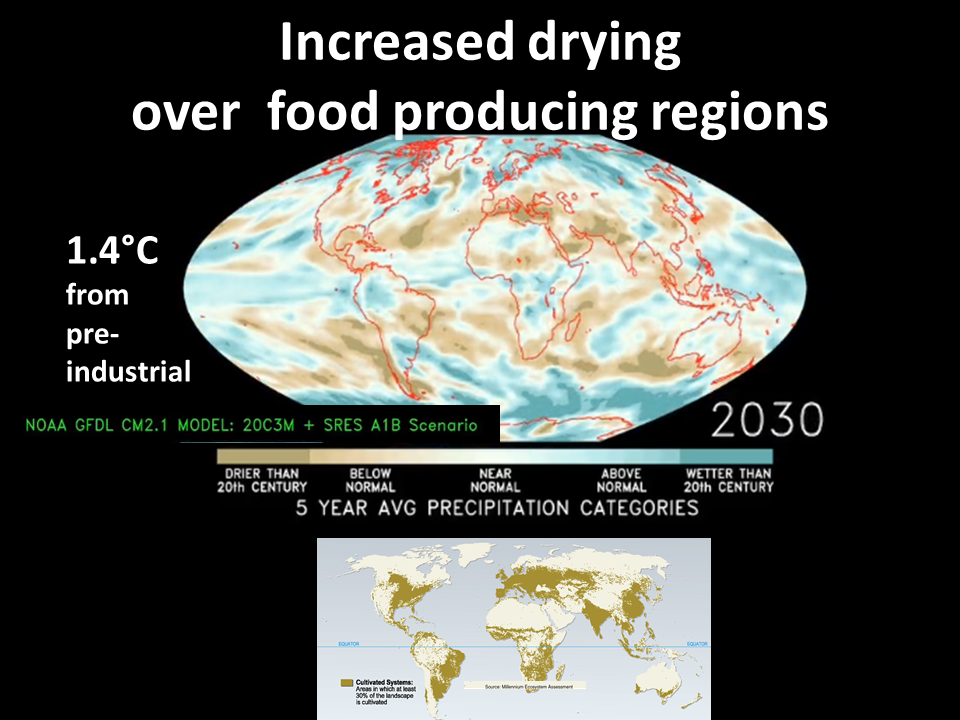 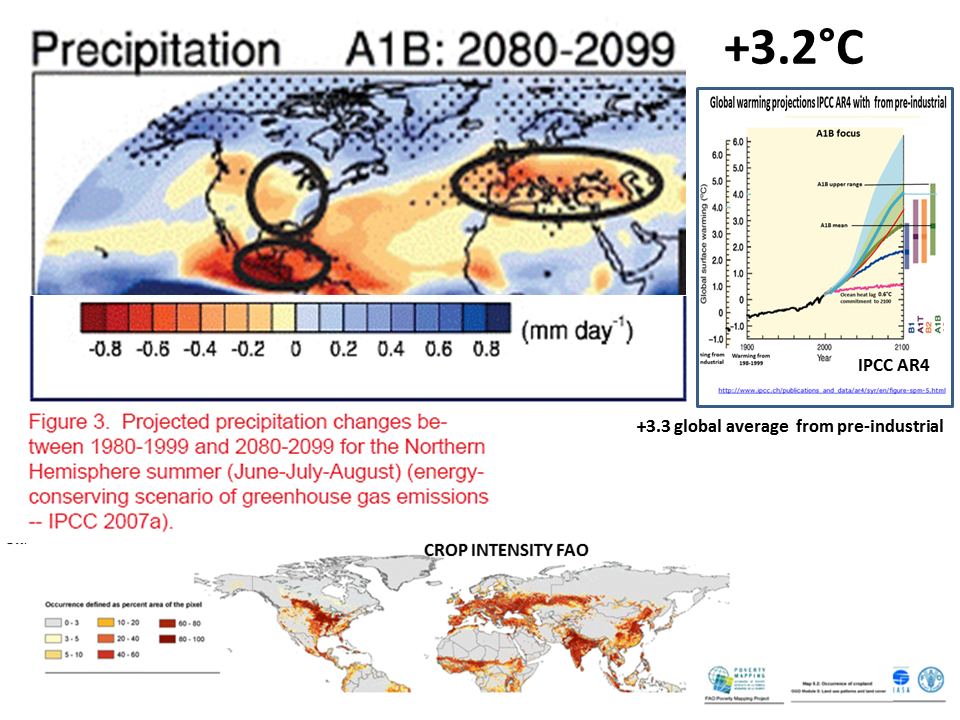 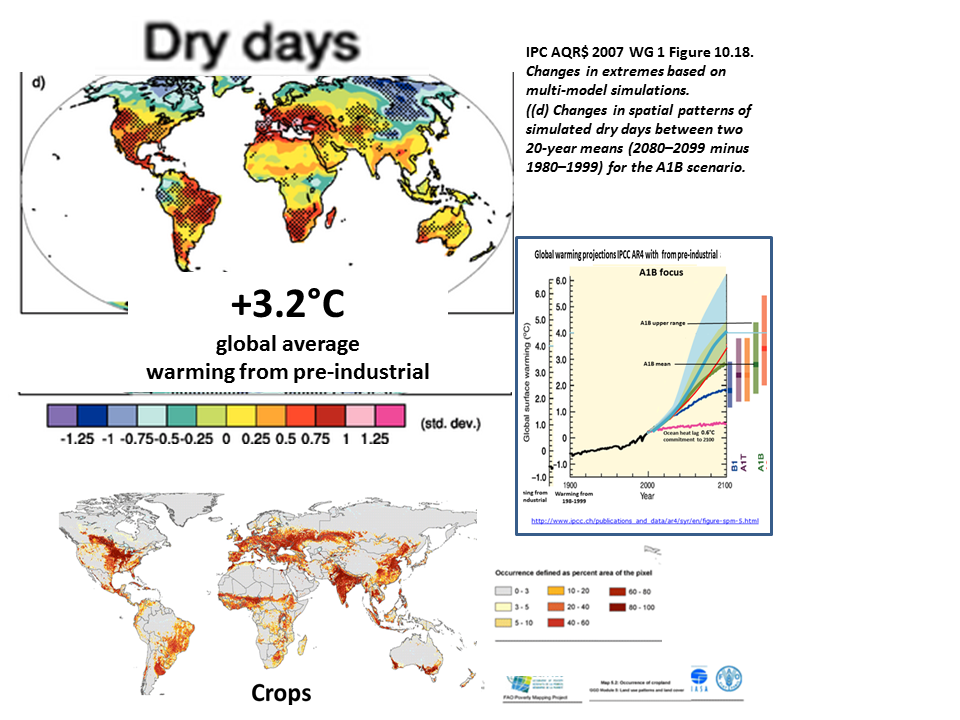 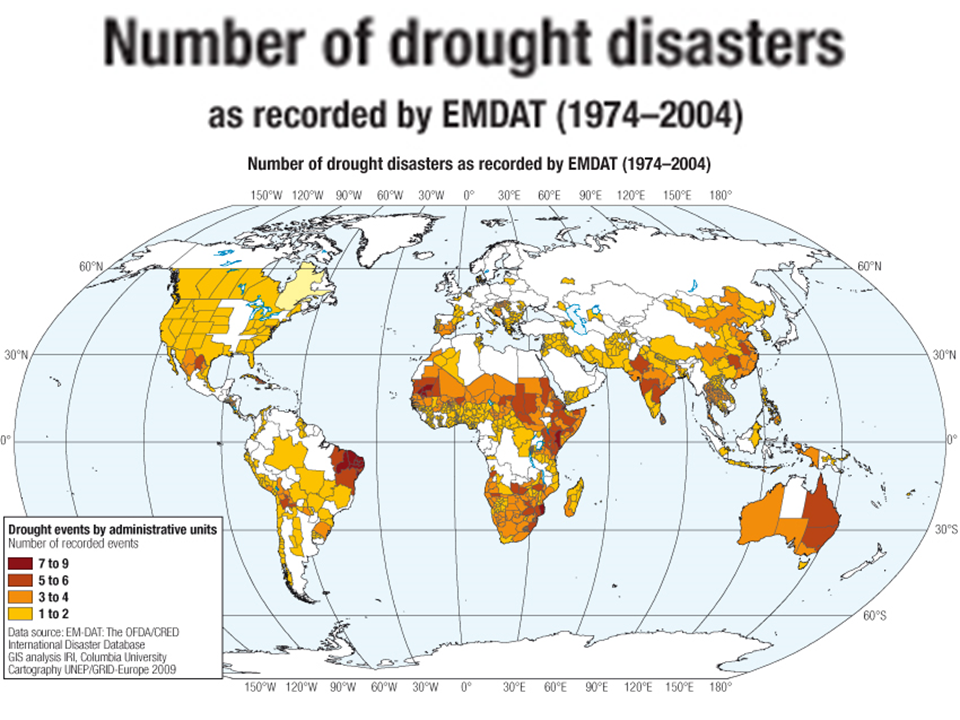 16 April 2020 ​
​Climate-driven megadrought is emerging in western US, study says

​​MARCH 2014 LARGE GLOBAL DROUGHT STUDY:Weather Underground DROUGHTS TO BECOME MORE FREQUENT OVER NEARLY A THIRD OF THE EARTH. EXPECT THE WORLD'S BEST FOOD PRODUCING REGIONS IN THE TEMPERATE NORTHERN  HEMISPHERE TO BE HIT BY INCREASING DROUGHT UNDER GLOBAL WARMING AND CLIMATE CHANGE WITH LOSSES TO FOOD SECURITY EVEN WITH ADAPTIVE MEASURES. ​March 2014 Global warming and 21st. century drying Benjamin I. Cook, Conclusions 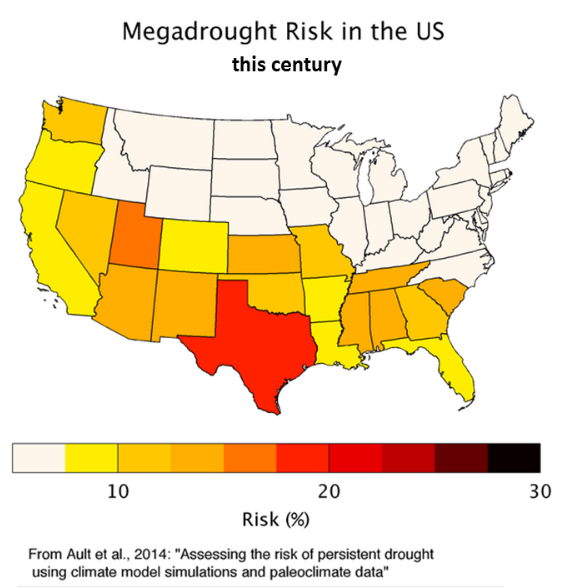 Oct 2014 EU 'With global warming, the world is likely to become increasingly prone to drought events. About half of the Earth’s land area is susceptible to drought, which killed more than 11 million and affected more than 2 billion people from 1900 to 2011. Over the past decades, droughts have become more recurrent in Europe, causing approximately 100 billion Euros of damage from 1976 to 2006.' 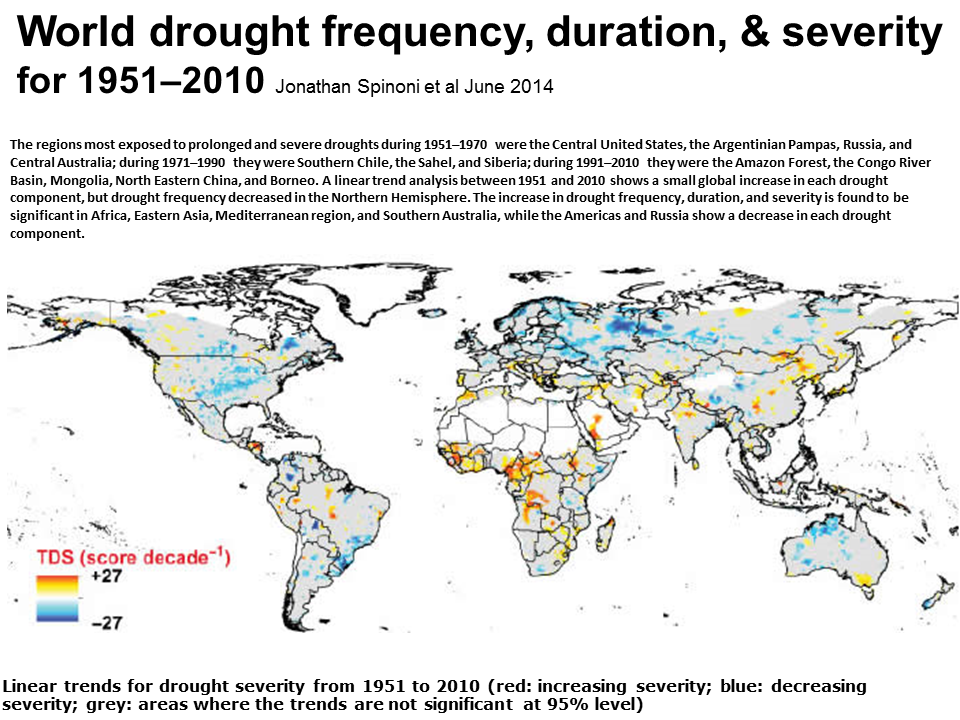 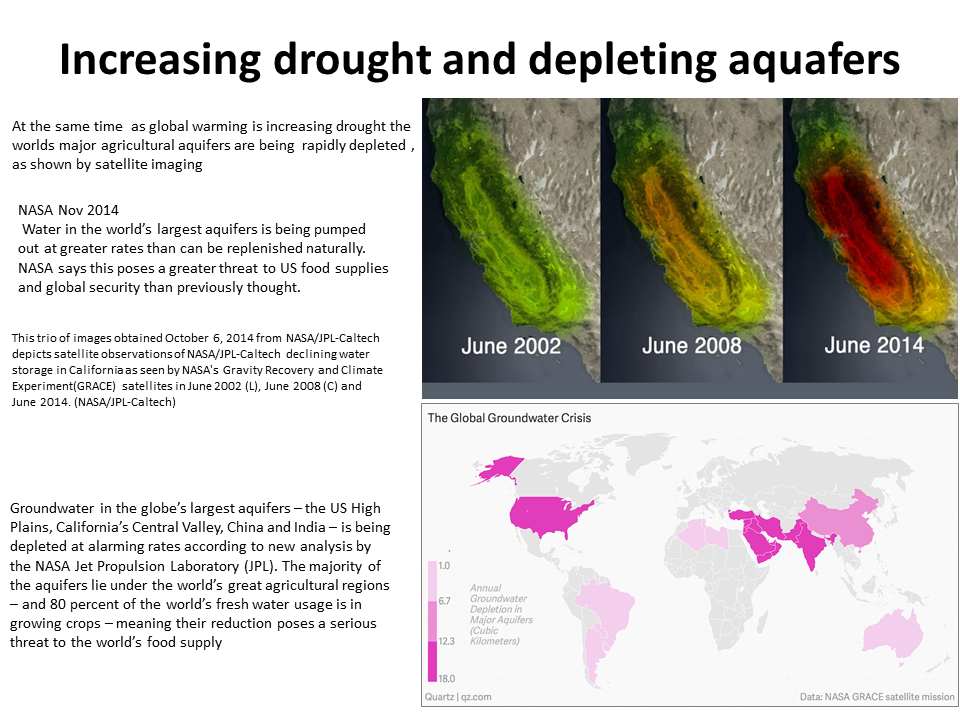 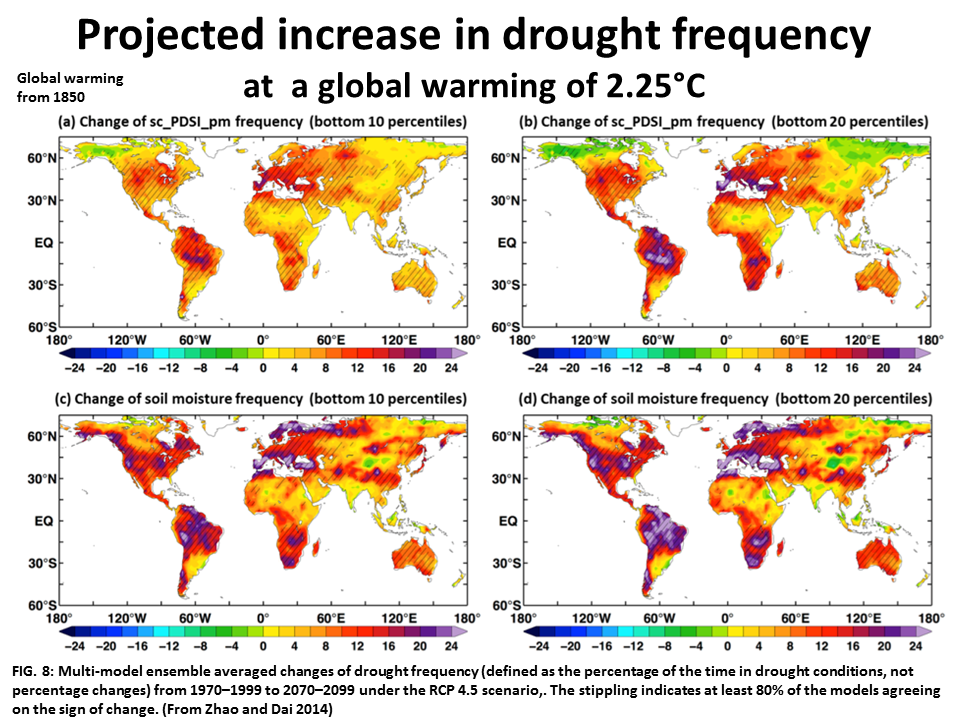 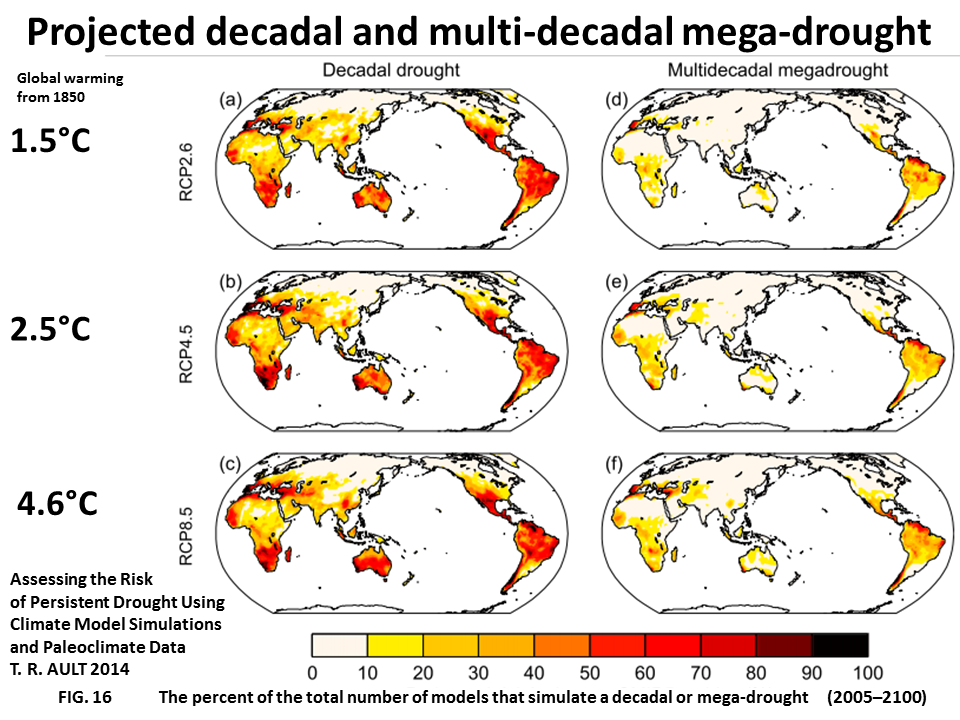 The 2015  N. America drought research confirms the extensive severe drought increase of A Dai's 2010 research that increasing drought could affect much of the world within decades. Under the 2C policy target most of the world will suffer severe drought, with decade long drought for some major food producing regions,and mega-droughts for a few regions. 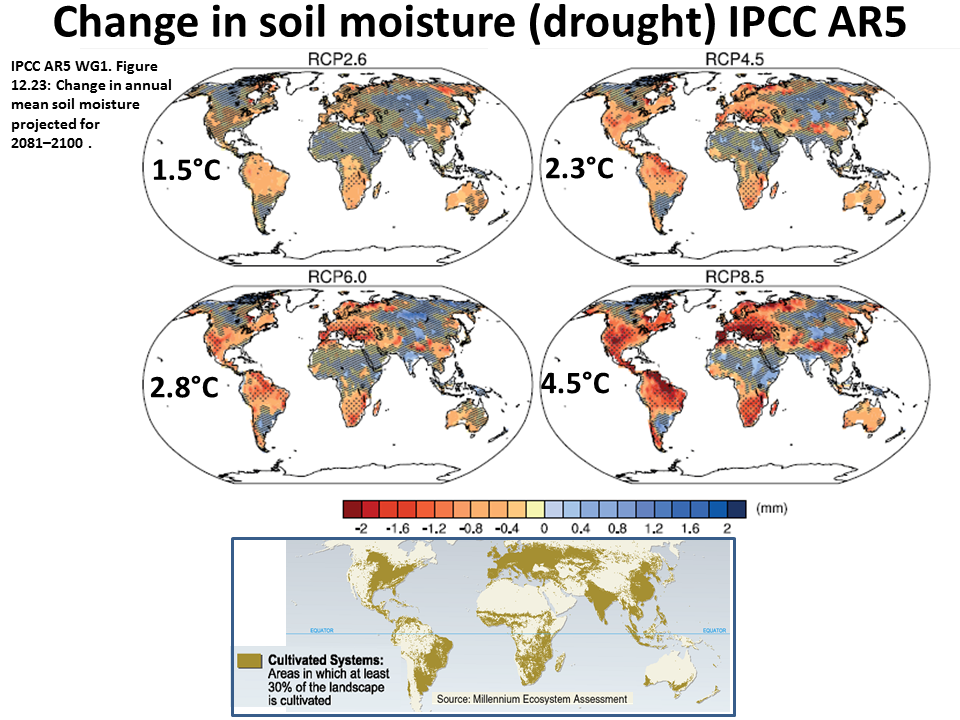 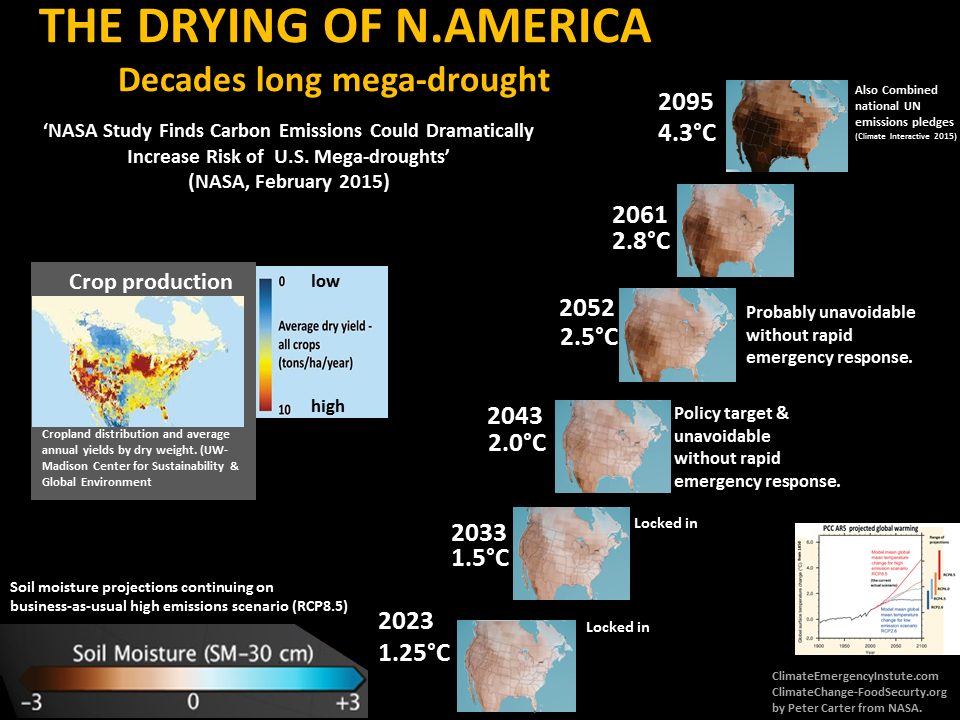 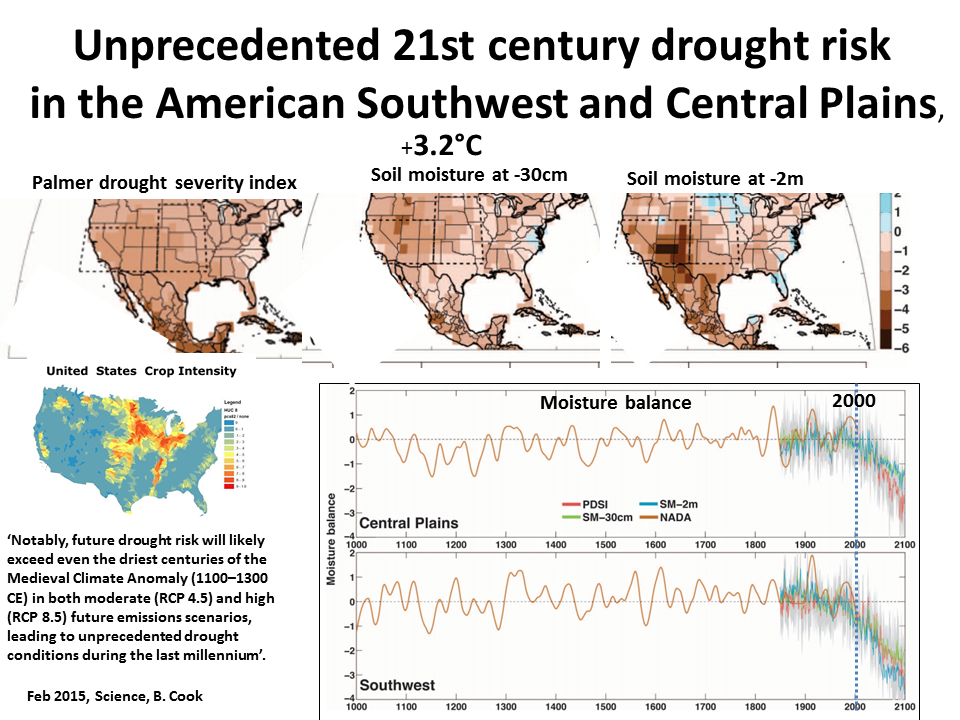 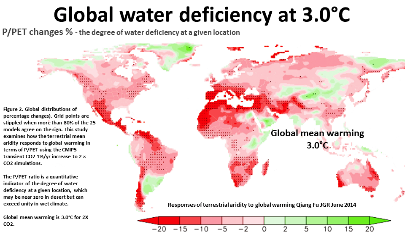 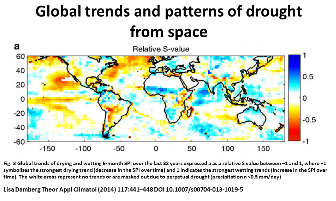 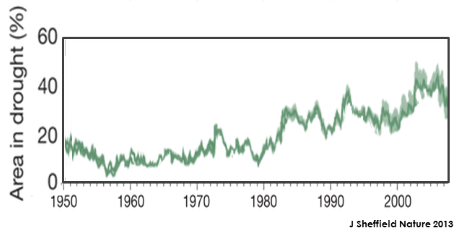 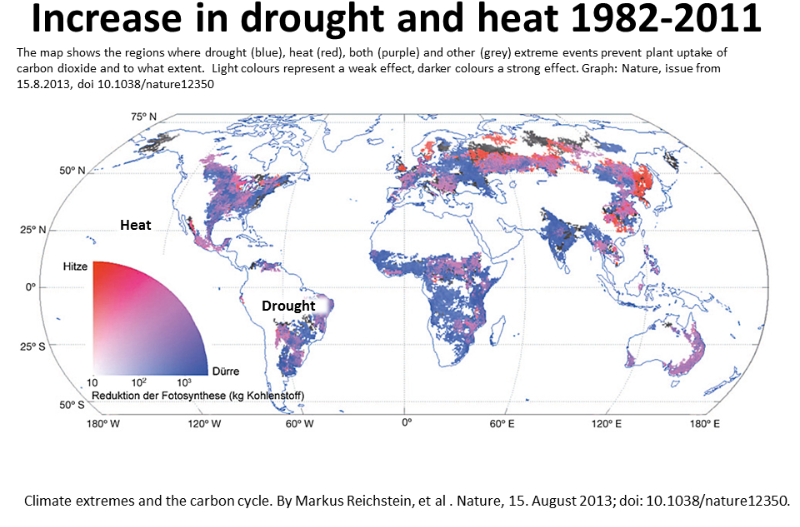 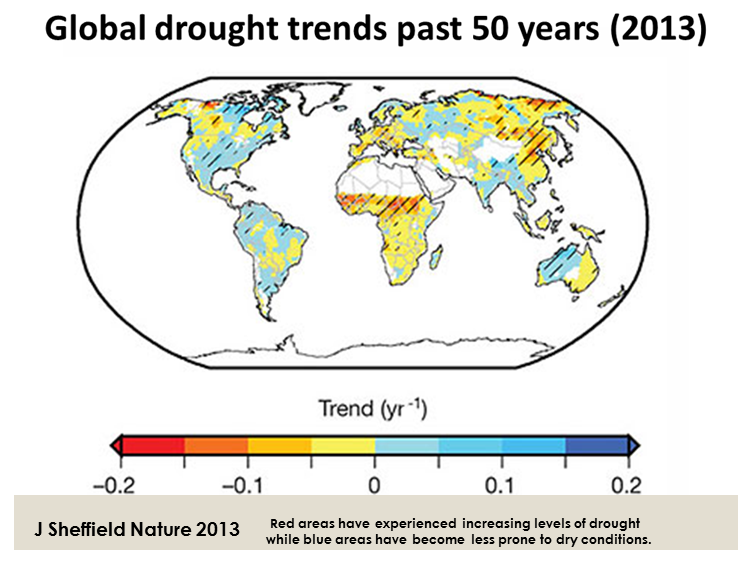 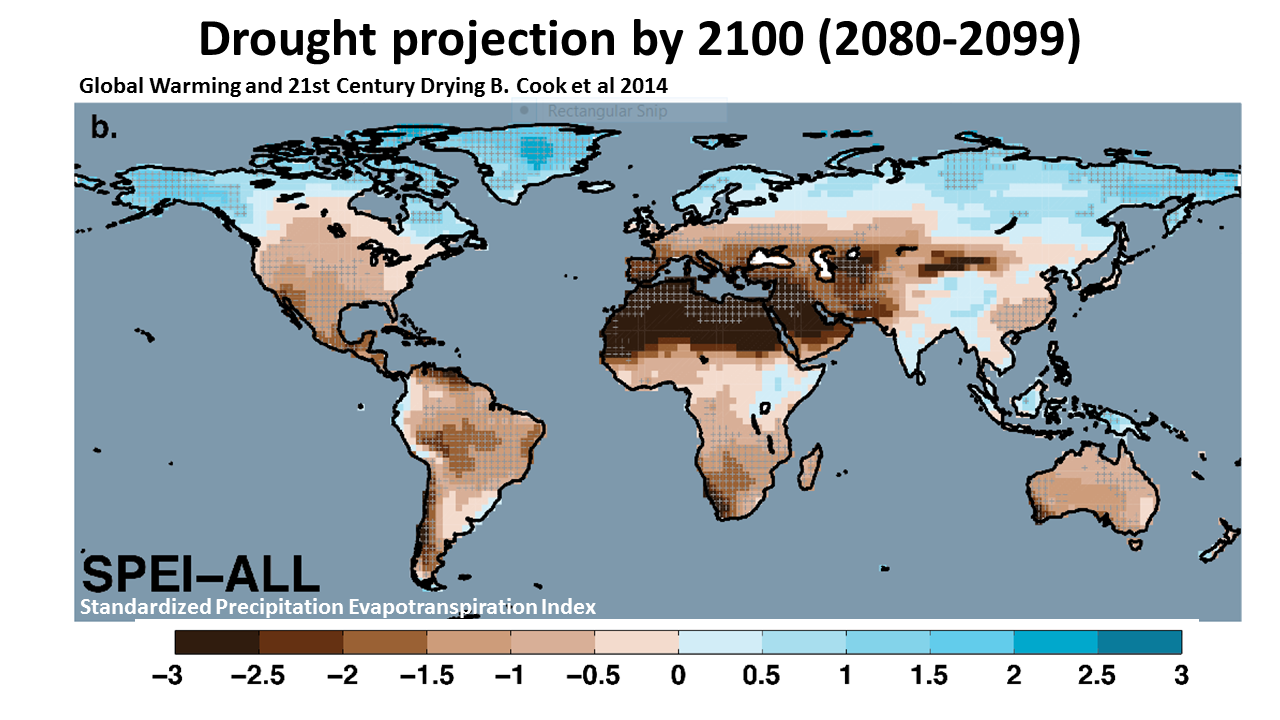 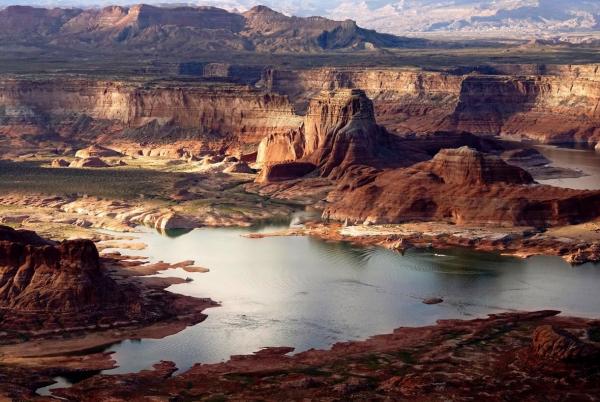 Lake Powell
24 Oct 2017 World Bank Uncharted Waters...21st century collision of two powerful trends—rising populations coupled with a changing climate. With population growth, the demand for water is growing exponentially while climate change is making rainfall more erratic  and less predictable.  With climate change,... longer and deeper periods of droughts and deluges. Impacts are deep cascading and long lasting.
World Bank world Drought forecast
The watchers on drought
Up to date ​drought news
Best overall  Copernicus Global Drought Observatory
NASA World view
April 2018 FAO The impact of disasters and crises on agriculture and food security The rising incidence of
weather extremes will have increasingly negative impacts on agriculture because critical thresholds are
​​already being exceeded. Drought causes 83% of all damage and loss to agriculture and 86% to livestock
​
1 May 2019 Human influence on global droughts goes back 100 years, NASA study finds 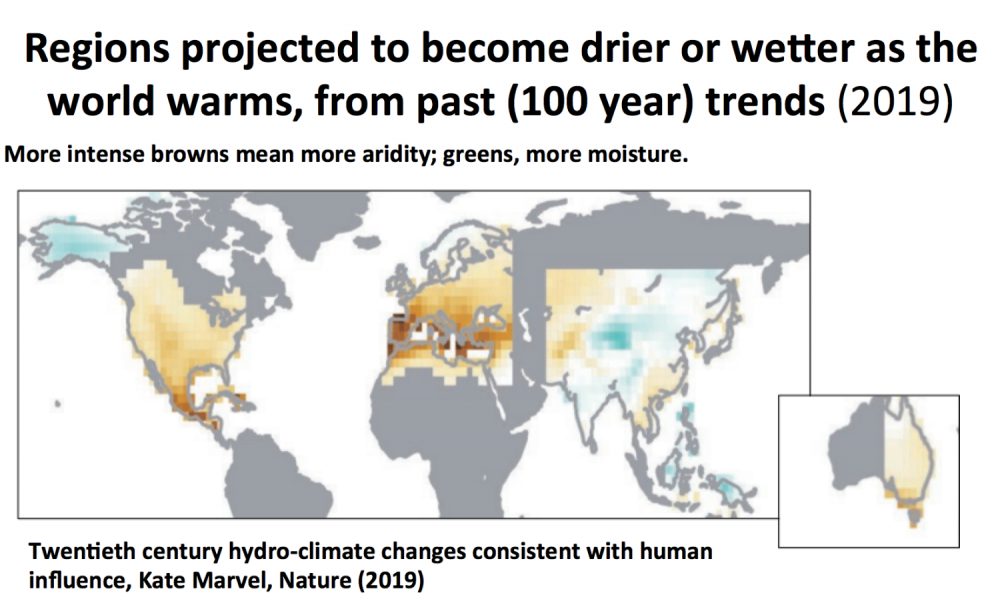 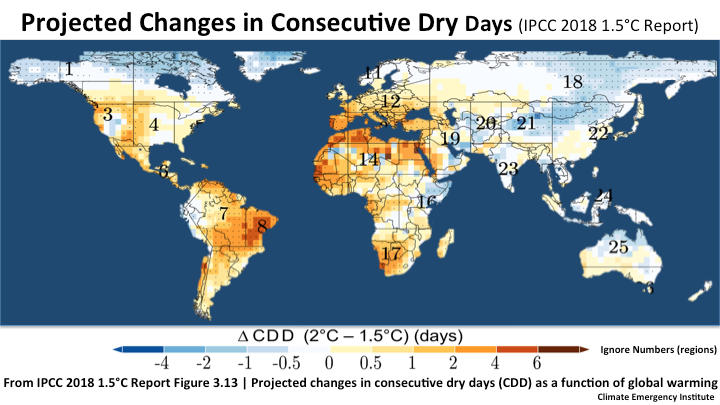 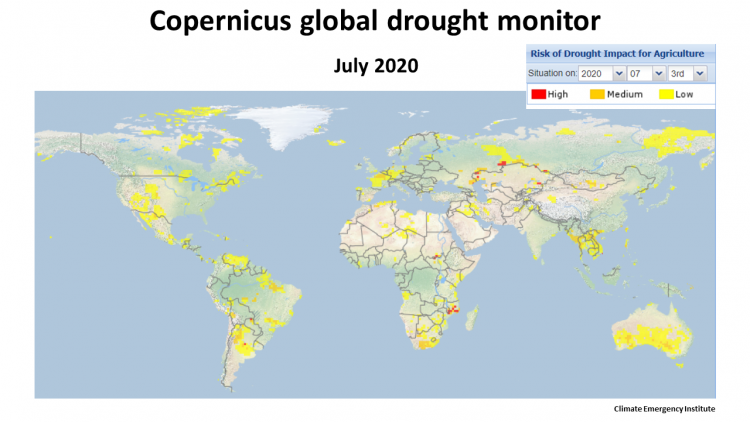